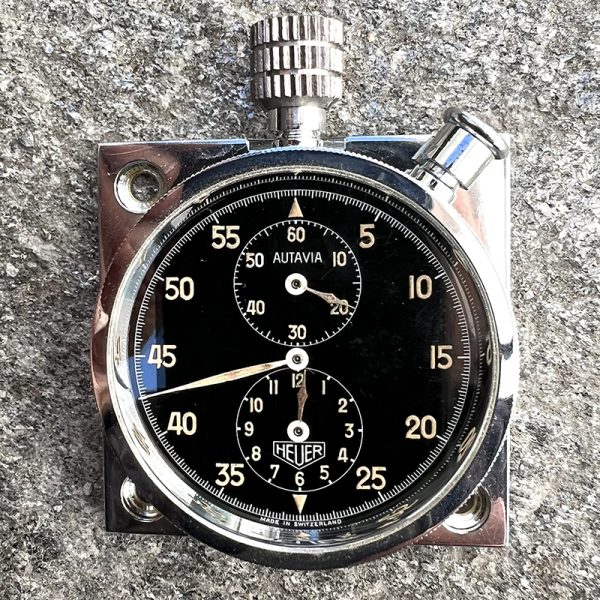 Surprising for many the first Autavias was a dash mounted timer. Production started in the thirties and the name reflects the use both in cars (“automobiles”) and aircrafts (“aviation”). There is also a model for boats, the Navia (“navigation”). This particular Autavia was used in a railcar in Norway, and was probably produced ca 1955. The serial number 312461 should be a help in accurately determining this. It is driven by a Valjoux caliber 340 movement that has been fully serviced in Switzerland December 2021. Heuer stopped producing the dash Autavias in 1958. At the same time they introduced the Super Autavia which had the added function of telling the time. Several models of dash timers were introduced in the following years, making the Autavia as the one we have here a much rarer item. The condition is very good, and the markings are great!. As can be seen from the pictures, the signature Ed.Heuer is present on the back of the dash mount, on the back cover and on the movement. The dimensions are: Back plate 58×58, diameter 54 and thickness including back plate 18,6 mm. The condition of the dial is super, the white graduation crisp. All numbers are full lume,  with only a small loss of material on two numbers in the top subdial. This is in all a superb, collectible vintage timer from  rallying history!