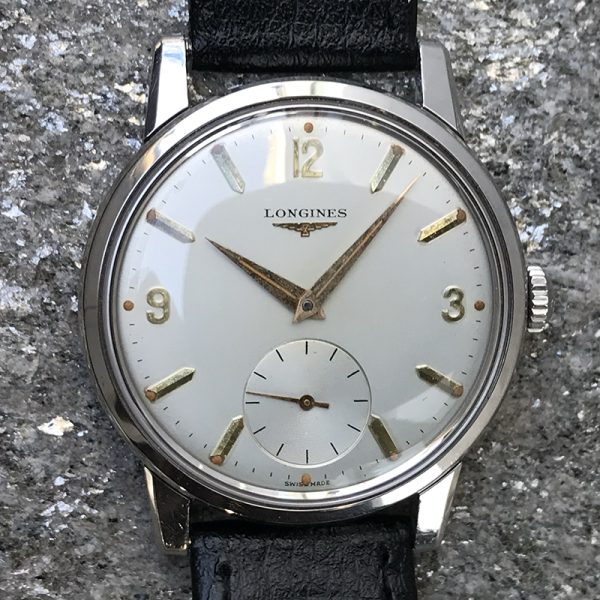 A mint, stainless steel, classic vintage with a famous movement inside. The 30L caliber is a high quality piece of art from the best period of time in the Swiss watchmaker industry. From the early sixties, before the disturbing news of electric and quartz watches, the watch industry was at it´s top mechanical performance. Later in the decade, approaching the seventies, most of the manufacturers found times to be more difficult every year, and by 1980, two thirds of the workers in the industry had been laid off. This meant cheaper materials, less hours worked on every watch, trying to compete with the newcomers that relied on a battery. From 1961, this is a late sub seconds layout. (The black dialed Flagship (gold on steel) we have in our selection have the sweep second version of the movement 30LS). The movement has been fully serviced and carries the serial number 11713277. The super silvered no date dial on this 30L have gold, applied indexes, logo and numbers at 9 12 and 3. All lume is intact. The super original Longines crown warrants that this watch has been carefully and probably sparingly used. Case dimensions are: diameter 35,2mm, thickness 10,2 and lug tip to lug tip 42,2mm. The inside back cover is stamped 71762/70. There are no marks on the case or caseback, making for a quite uniquely well conserved vintage watch worth collecting.