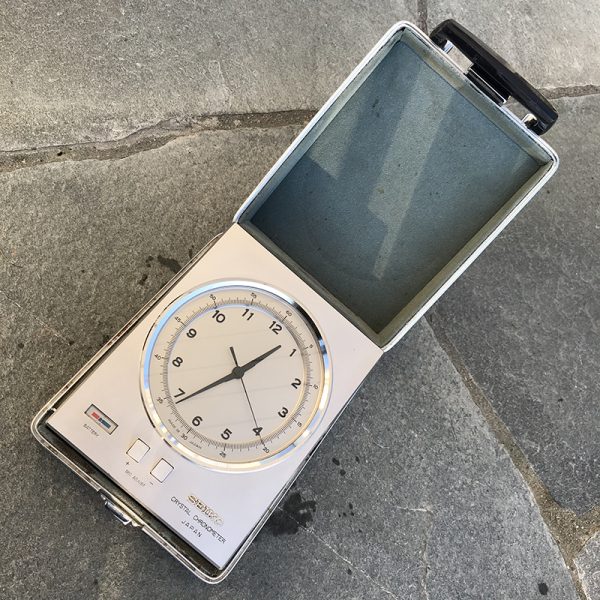 Accurate timing, just in time for the 1964 Olympic Games in Japan, this portable chronometer was a revolution. Quoting the Seiko Museum: “The world’s first portable quartz clock.

Another epoch-making time device used at the 1964 Olympic Games in Tokyo was the Crystal Chronometer. It was smaller and lighter than any other and could be easily carried and set up at any venue. Seiko’s 1959 quartz clock was 2.1 m high and as big as a wardrobe; just four years later, in 1963, this new quatz chronometer was just 20 cm high and was ready for use at the 1964 Games. As the world’s first portable quartz clock, it ushered in the era of electronic timing and revolutionized the field of sports timing. It incorporated new technologies, including a temperature compensator and a small low-power synchronized motor, fabricated by precision machining techniques. Combined with a digital quartz stop clock, a digital printing timer, and an electric scoreboard, this device allowed the SEIKO timing team to use electronic systems for the first time in the history of the Olympic Games.”

We are very pleased, and consider us lucky to be able to offer this working example of the Seiko Crystal Chronometer, considering it’s importance in the history of timekeeping. It appears to have been on official business for a Swedish government department, since we find the national symbol “Tre Kronor” on the back (located on the stick-on Swedish text manual). The dimensions of the box are (cm) width 12,5*length 21,5*height 10.