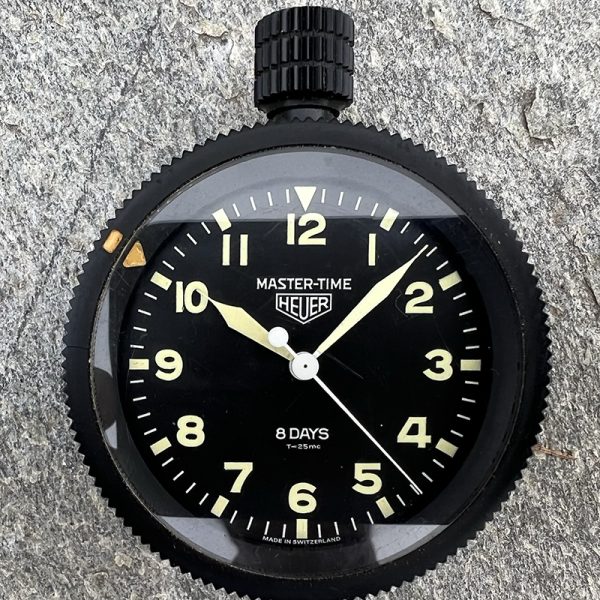 From the seventies, this 8-days timekeeper is often referred to as a clock. According to the nomenclature we prefer to call it a watch.That is because the classical distinction was drawn between a spring- or pendulumdriven movement. Historically a watch was never as accurate as a pendulum “regulator” (like a “grandfather clock”), but for laboratory-/observatory applications. The spring driven marine chronometer was invented to produce accurate timekeeping in a vessel. It is a bit funny therefore that a ship’s clock is not the watch on the bulkhead, but rather the ships bell with it’s hanging “ball”.  The Master-Time was used mostly in cars, but Heuer also advertised it for use in aeroplanes and powerboats. The movement is stopped (like a timer) to allow it to be synchronized by pulling out the crown. The caliber is Arogno 28H. Maybe the H stands for Heuer? Anyway, the 15 jewel movement is signed Heuer-Leonidas, as is the inside of the back cover. The diameter including the bezel is 58,3 mm, the sickness 25 mm. The dial is in super condition, the full lime numbers and hands likewise. You should note that this does not come with a backplate and that the case and crown are in plastic. A super detail of this later version of the Master-Time are the full lume hour- and minute hands. We find that the shape and condition these hands (and the dial) really is something special.